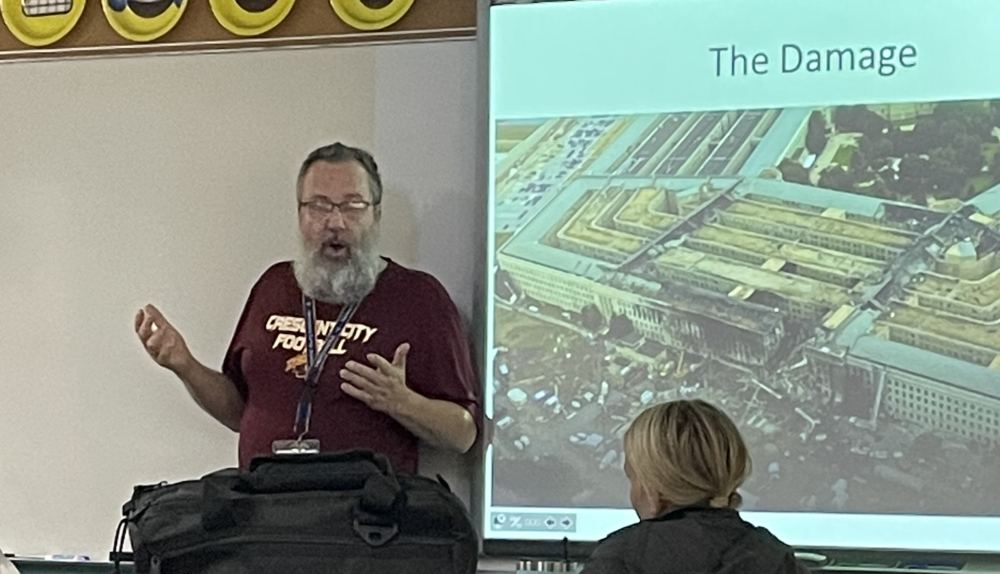 Q. I. Roberts Teacher Col. Dan Lewandowski Recounts Events of Serving in the Pentatgon on 9/11/2001

On Friday, September 10, students in the Q.I. Roberts/Embry-Riddle Aerospace classes listened intently to Col. Dan Lewandowski, their teacher, as he recounted the events of September 11, 2001. Col. Ski, as he is known throughout campus, was a Major in the United States Air Force at the time, and was presenting in a secure basement room of the Pentagon when American Airlines flight 77 hit ‘The Fortress,’ killing 184 people.

Having heard what sounded like a large safe hitting the floor above, Col. Ski had “three slides left,” in his presentation when a voice came over the intercom directing everyone to evacuate. Thinking that this was only a drill, he evacuated as we all have so many times, until the smell of burnt jet fuel hit him. “That’s when I knew it wasn’t a drill.”

He recounted the rush of traffic as people were leaving town, gripped with fear of what could come next. Cell phones were useless as towers were overwhelmed with calls from all over the nation, loved ones checking on the safety of their families. Mrs. Lewandowski, also a staff member at Q.I. Roberts, left her car and took the Metro home, returning later to the eerily empty D.C. roads, monitored by military vehicles as they retrieved their car.

The next day, Col. Ski was immediately called into action, coordinating international aid flights into the U.S. as dozens of countries rallied to our side. A visibly emotional Col. Ski recounted how moving it was that, despite our being fully prepared to handle the crisis as a country, we received that aid from other Nations who were rushing to offer help, “because we had helped them.” He expressed the importance of America and our role in the world, how our work around the world was respected and appreciated, clearly shown in the days following the attacks.

He also told of the response throughout the Country as flights were grounded for four days, leaving people stranded overseas and at makeshift airports. At one World War II airfield, which was used to land some flights who could not turn back, citizens of the nearby town of Gander, Newfoundland, took over 7,000 stranded travelers into their homes until they were able to return to the U.S.

Col. Ski went on to explain his role in coordinating air support for the invasion of Afghanistan. Air power is the new High Ground, he said, and is the reason our military can be so effective with relatively small forces.

Students in the class were able to ask questions and get this unique perspective on the events of that tragic day and the weeks and months after it from a first hand account. Being in the Aerospace program at Q.I. Roberts, they have an interest in the impact 9/11 has had on the world of flight and the ways in which flying has since supported our role in  combating terrorism around the world.